I am wholeheartedly behind the campaign to end bird of prey persecution in the UK, and particularly the massacre of hen harriers on our grouse moors. As such, I am one of the invited speakers at the Hen Harrier Day being held at the RSPB’s Arne reserve in Dorset on Sunday 7th August. The event starts at 11am and I urge everyone to come along in order to show their support for this magnificent bird of prey.

Sorry it’s taken me so long to post a new blog post on here but I’m not the most adept computer user and I try to get outside as much as I possibly can, even if it means that my posts are several months late!

After a record-breaking wet winter here in Wales, spring has come in with a whimper.  Some daffodils and primroses were in flower in December, more than two months earlier than usual, but most wild flowers emerged at their expected time. I didn’t see my first queen bumblebee until early March and frogspawn here in the cold hollow of the upper Severn Valley doesn’t appear until late February at the earliest.

Rooks, grey herons and tawny owls are incubating their eggs as I write and this morning on a local Wildlife Trust nature reserve, it was a real pleasure to watch a pair of great crested grebes indulging in one of the most stunning courtship displays nature has to offer.  Something else to look out for in early spring is the colourful scarlet elf cup, a bright red fungus that grows on rotting branches on damp woodland floors.

Over the next few weeks, the leaves will burst forth onto our trees and shrubs, the flowers of lesser celandine and primroses will be replaced by bluebells and wood anemones, most of our common garden birds will be nesting and early migrants such as chiffchaff, wheatear and sand martins will be joined by swallows, pied flycatchers and, hopefully a few cuckoos. Spring is without any doubt my favourite season, an exciting time of rebirth when the whole countryside comes alive.

2015 has been an interesting and varied year for wildlife encounters and one of the most wonderful aspects for me has been exploring new areas. In May and early June, I was up in Caithness, Orkney and Shetland for Springwatch and my first ever encounter with orcas was memorable for many reasons, not least tumbling head over heels on camera!

It was a rare treat to be able to spend a day with wildlife cameraman Raymond Besant filming breeding hen harriers on the Orkney moors. These magnificent birds are mercilessly persecuted on so many English and Scottish moors that Orkney acts as a refuge for around 80 breeding females. Watching a male skydancing or passing food to the incubating female is one of the real highlights of British wildlife watching.

Just as memorable was a visit to the RSPB’s Arne reserve in Dorset in July to seek out two species of spider. The wasp spider, a beautiful white, yellow and black creature, first colonised the UK from the continent in 1922 and has spread slowly north and west. The raft spider, on the other hand, is a large, native arachnid that lives around the edges of ponds and swamps therefore Arne’s wetlands are ideal for it.

In 2015, I was also able to fulfil a dream I have had since childhood, to see a large blue butterfly in the UK. Due to loss of habitat, it became extinct in the British Isles in 1979 but has subsequently been successfully reintroduced to several suitable sites in the south of England. In early July, I visited a site in the south Cotswolds and was delighted to see several of these stunning insects feeding on wild thyme in bright sunshine. A memorable day!

Over the past few years, there has been a great deal of talk about the decline of hedgehogs in both urban and rural habitats in the UK.

As a child growing up in the village of Llanwddyn near Lake Vyrnwy, we had hedgehogs coming into our garden every summer, often with a handful of youngsters in tow. These days, I’m lucky if I see more than two or three live hedgehogs in a year but this autumn, following the unseasonably mild weather, I saw 5 different hedgehogs within three miles of my house, all of which looked healthy and well-fed.

I’m sure the abundance of food and warm weather meant that they could pile on enough weight before going into hibernation and thankfully, not one has been seen dead on the local country lanes.

Having recently cut my hedge, I’ve created a large pile of thin branches, dried leaves and grasses in the corner of my garden and I’d like to think that at least one of the hogs is safely curled up at the bottom of the pile waiting for the weather to warm up once again. 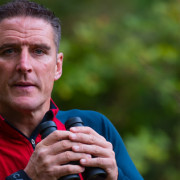 The Vincent Wildlife Trust’s Welsh pine marten project has reached an exciting stage as the full complement of 20 animals have now been released into the wild. These have all been fitted with radio collars therefore they will be followed throughout the winter in the hope that they survive to breed in the spring.

I recently spent two fascinating days with Dave Bavin and his team in the forested valleys of mid-Wales and I can’t begin to tell you how excited I am to see this beautiful mammal back where it belongs.  Although they are opportunistic omnivores, feeding on a wide range of prey, from mice and voles to blackberries and bilberries, recent research in Ireland has shown that pine marten target grey squirrels to the benefit of the smaller, more agile red squirrels.  It’s far too early to tell whether this could happen in mid-Wales but wouldn’t it be wonderful to walk through a Welsh woodland containing red squirrels and pine marten?